The Irish Cruising Club – 1929-2019
by WM Nixon
Cruising under sail along the coasts of Ireland has a long and colourful history, but it was not until 90 years ago, in 1929 that the Irish Cruising Club was brought into being.  It was to act as a coordinating body for seagoing amateur sailors in all parts of a country which had only recently been partitioned. 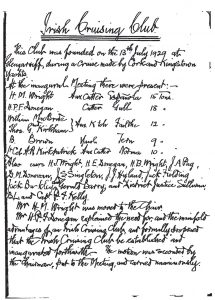 Cruising clubs already existed in other parts of the world, usually founded in cities by like-minded enthusiasts at winter gatherings.  But this new organisation had given itself a special ﬂavour by arranging to bring about its establishment through a cruise-in-company by a small ﬂotilla of ﬁve yachts on the southwest coast of Ireland.  The inaugural meeting was held in Glengarriff at the head of Bantry Bay on the evening of Saturday July 13th, 1929.  The leading inspiration for the establishment of the club came from Harry Donegan of Cork, supported by Billy Mooney of Dublin.  Both were sailing enthusiasts of broad interests.  Donegan was a founder member of the Royal Ocean Racing Club.  He took third place in the inaugural Fastnet Race with his cutter Gull in 1925, while Mooney was to be a class winner in the same event with his ketch Aideen in 1947.  Thus, offshore racing was seen by many of the early members as an integral part of their activities. By the 1960s the ICC was organising Ireland’s biennial Admiral’s Cup teams. But international sailing was becoming an increasingly complex business, and it was apparent that the health of the club would be best served by concentrating solely on cruising and the services the club provided for its members and the cruising community.

By the 1970s, the club’s rules were undergoing revision, and in 1992 its purpose was clariﬁed:  The objects of the Club shall be to associate sailing yachtsmen, to encourage cruising with particular emphasis on cruising off the Irish coast, to gather and publish information useful to yachtsmen concerning tides, tidal streams, harbours, anchorages, lights, navigational aids, shore facilities and such like and to record and/or publish logs of cruises and passages undertaken by members.

Ever since 1929, the Club’s members have worked voluntarily towards the production of Sailing Directions which today cover the entire coast of Ireland in two volumes:  Sailing Directions for the South & West Coasts of Ireland, which began life as the South and Southwest Coast book, edited by Harry Donegan in 1930.  The 15th edition is due out later this year. • Originally published as the East Coast book in 1930 under the editorship of Billy Mooney, the 13th edition of the Sailing Directions for the North & East Coasts of Ireland is also due to be published later this year.  Both of the current books are edited by ICC member Norman Kean.

Since 1931, the Irish Cruising Club has organised sailing log competitions, inaugurated by its premier award, the Faulkner Cup, donated by northern member James Faulkner. The logs are published in a privately circulated Annual, that collates the members’ cruising narratives.  The Annual has become a profusely illustrated 180page book, published in time for Christmas and edited by Máire Breathnach.  Women members have always had equal rights in the club.  The ﬁrst woman to win the Faulkner Cup was Elizabeth Crimmins in 1934. In 1939, the winner was Daphne French, for a remarkable cruise to the far end of the Baltic Sea in a little boat called Embla.

The ICC now has many challenge trophies. The award-winning cruises include major international and transoceanic ventures.  Nominations for these awards are made by members and are accepted each November, for consideration at the Club’s committee meeting in January.  Although the Irish Cruising Club has no premises of its own, it is essentially based around a membership in Ireland cruising the Irish coast, its activities have always included a signiﬁcant outward-looking element. 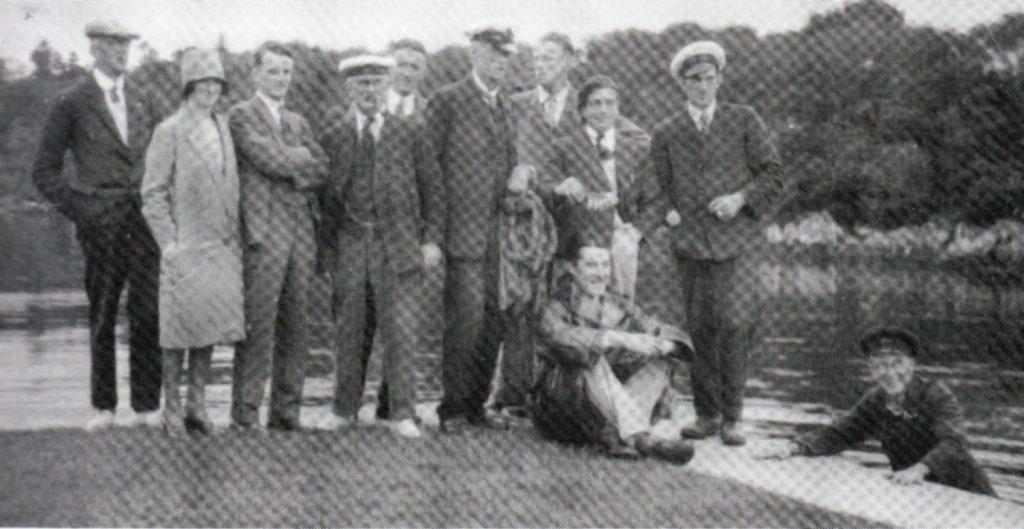 At the founding of the ICC in Glengarriff. The three white tops are (left to right) ‘Old Harry’ Donegan, Herbert Wright Senior and ‘Young Harry’ Donegan. Gerald Barry is on the right in the beret, while Billy McBride is at the lower right standing (we hope) in a dinghy

More about the books below can be found under ‘ICC BOOKS‘ in the main menu above.
You can also buy them there! 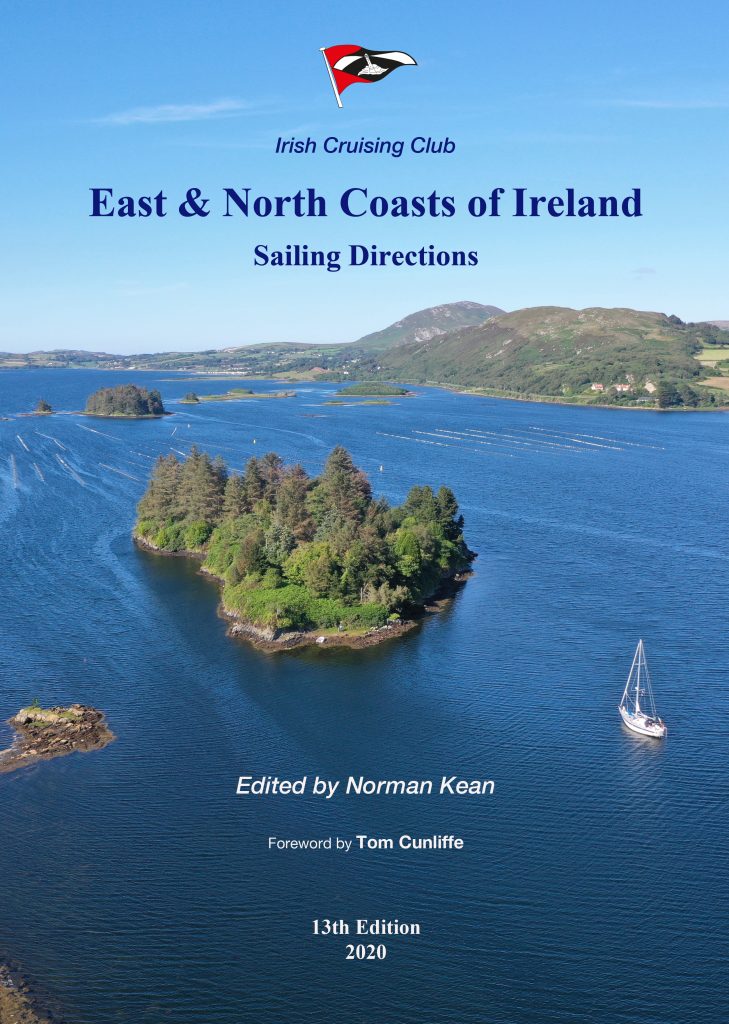 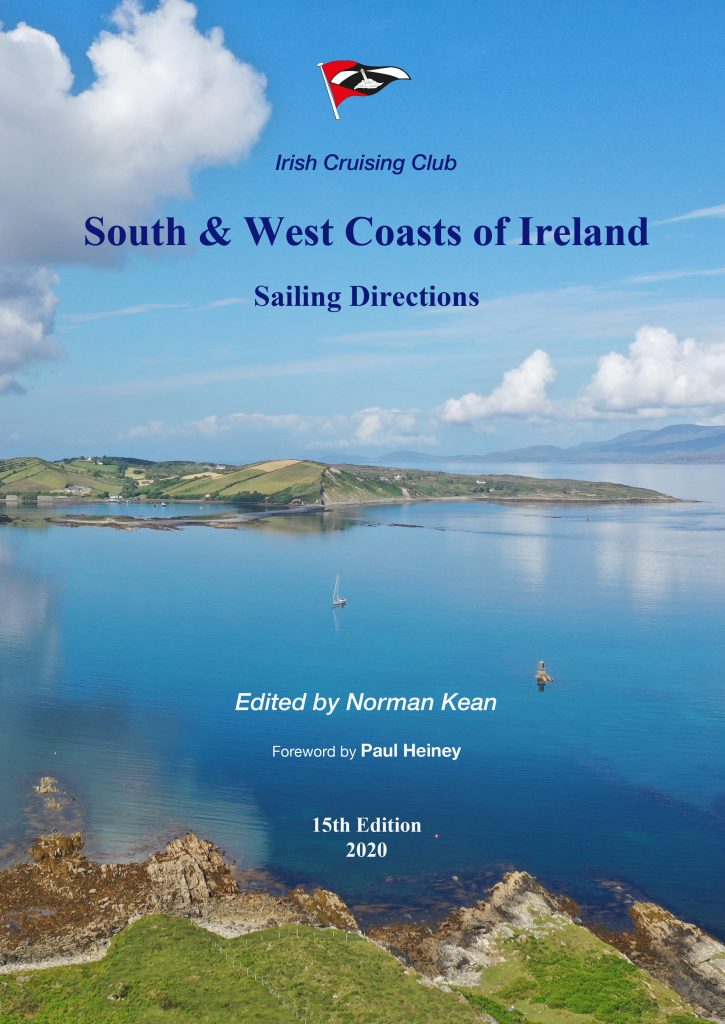 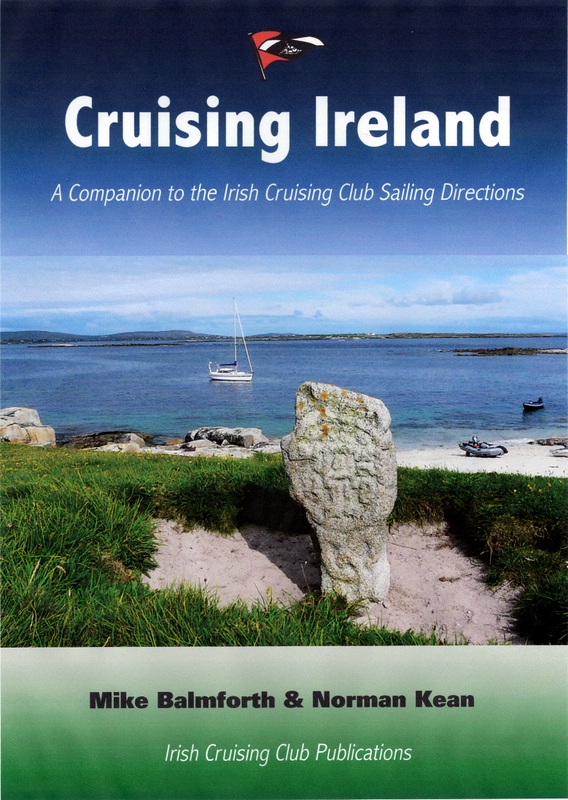