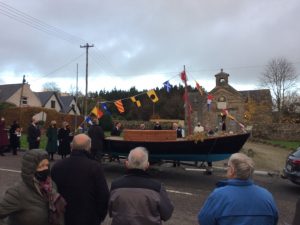 This is funeral cortège of Emily Villiers Stuart recently (Oct 21).  Her husband James  was a member iof the ICC and was an early contributor to the ICC Sailing Directions. Their boat was called Arctic Tern , a Nicholson 36(?)
They were Arctic sailors. The boat was based in Ferry Point, Youghal.
The ‘hearse ‘ is a Drascombe Sailer.
Emily died at the age of 92. Her wish was to be brought in a boat to the graveyard in Villierstown
(Thanks toDan Cross for passing this story to us.)

Following a short overnight in Kilmore Quay it was a good fetch on to Crosshaven where we enjoyed immediate hospitality with friends.
On Sunday, Frank and Adrian E left to be replaced by Robert and Elizabeth Seigne.  We noticed that we were parked nose to nose with a Mirage 28, which Robert had built from a bare hull with engine on bearers, still in good condition :

Monday was given over to some boat work and getting to the bottom of a regular bilge pump issue. Thus sorted, we headed to Oyster Haven on Tuesday for a pleasant night at anchor.

Wednesday saw us in Kinsale as the Sovereign’s Cup was just starting with a great buzz.
We dropped Elizabeth off there and had a great sail down to the old head and across to Courtmacsherry where we tied up on the pontoon. Going ashore for the obligatory pint of Murphy’s

Returning to Kinsale on I left the boat with Robert’s family arriving the same day.
With Robert and family back home, I returned with Niamh on July 1st to celebrate my birthday with a seafood feast aboard.  David & Noelle Ryan joined us on the Friday for a very enjoyable weekend. Fresh winds meant that we only got as far as hole open bay in search of Minke Whales which had been reported but unfortunately none were sighted.
Niamh left and Robert rejoined in time to sail on to Union Hall on Wednesday 7th, where we were joined by Heather Craig.

Reports of the further adventures to follow …….
Adrian Hinkson