The ICC intends to host a cruise of yachts in the Madeira island group in June/ July 2023 to mark the centenary of Conor O’Brien’s circumnavigation of the world.

Conor O Brien’s* circumnavigation in his yacht Saoirse, commenced from Dun Laoghaire on 20th June 1923. The Port of Funchal in Madeira was his first port of call, where he arrived on 3rd July,1923.

Conor O’Brien was the first person to be awarded Honorary Membership of the ICC in recognition of his outstanding achievement. We intend to commemorate the centenary of the first leg of his voyage, while having an enjoyable cruise for members and guests.

Since we announced the 2023 Irish Cruising Club Madeira Cruise, much work has been done, and the organising sub-committee would now like to update you on our plans.  We have made a major break-through in organising berthing space in Funchal. Peter Haden put us  in touch with Catia Carvelho Esteves, who happens to be the OCC Port Officer in Funchal. Our own John Duggan came on board, and together John and Catia have had meetings with the key authorities in Madeira, namely
 CNF – the Cruising Club of Funchal
 APRAM – Madeira Ports Authority
 DRT – Regional Tourist Authority
Recognising the very limited marina berths available, and captivated by the historic nature of Conor O’Brien’s circumnavigation, the Madeira bodies above have committed to partner with the ICC in organising our commemorative event.
 The event will henceforth be referred to as the “Saoirse Rally”
 The “Saoirse Rally” will become an event in the Madeira Tourist Calendar
 We have been allocated the Special Event Basin in Funchal which is East of the current yacht marina – see graphic below.
 Pontoons will be moved from storage and installed in this basin to accommodate “Saoirse
Rally” participants. (Space for 40/50 boats)
 There will be provision for a tented village
The implications:
 Now that we have secured extra berthing space, the Commodore has recently extended invitations to join the “Saoirse Rally” to our sister clubs, the RCC, CCA, CCC and OCC.
 Rather than boats moving around during our stay, boats will be berthed at the Events Basin for 6/7 nights 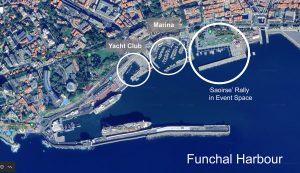 Expressions of Interest
To-date, we have registered Expressions of Interest from 22 ICC member boats. In addition, we have registered interest from 4 RCC members and this number is expected to grow as communications go out to members of the other clubs.
The “Saoirse Rally” is shaping up to be a significant sailing and social event, and a worthy celebration of Conor O’Brien’s heroic achievement 100 years ago. It not too late to join in.
If you want to be part of the “Saoirse Rally”, please send an Expression of Interest email to Seamus O’Connor at socmarine@gmail.com
Please include your Boat Name, LOA, your name and email address.
If you want to discuss any point, please contact Seamus or any member of our sub-committee
Tony Linehan : Tony.Linehan7@gmail.com
Paul Taylor : Paul.Taylor51@icloud.com
John Duggan : duggan.john@gmail.com

The voyage there and back 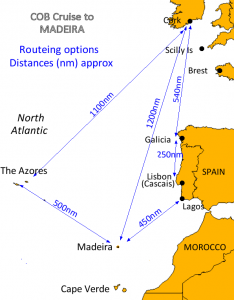 Madeira is about 1200 nm from Ireland.  However, the voyage can very conveniently be made with shorter passages. Examples are:
Ireland – 600 nm –> Galicia – 280 nm –> Lisbon – 130 nm –> Lagos – 500 nm –> Porto Santo.
Galicia –> Porto Santo direct is 700nm.
All these places (except Porto Santo) offer the possibility of crew changes.
A return from Madeira might go: Funchal – 530 nm -> The Azores—830 nm –> Galicia.
All the potential stop-overs offer great opportunities to explore, rest, revictual and to leave a boat over winter.
Thus, the voyage to and from this cruise can be considered an opportunity to do some bluewater cruising with a lot of interest en route. When we begin to understand how many yachts are participating and get some idea of their preferred routing, we may be in a
position to organise events/support, for instance in Galicia, Lisbon or indeed Lagos.

The event organising committee are working hard to produce an enjoyable and worthwhile
cruise. Do join us for all the fun and adventure.

More about Madeira
Madeira represents a significant island in the context of the ‘Era of Discovery’ for Portugal; Madeira was its first discovery in 1419. Madeira consists of the main island with the capital Funchal. Then to the NE is the island of Porto Santo. It is a delightful island to visit. To the SE are the Ilhas Desertas, made up of three islands, which are an uninhabited (except for wardens) nature reserve with some anchorages. A permit is required to visit. (Details will be checked) 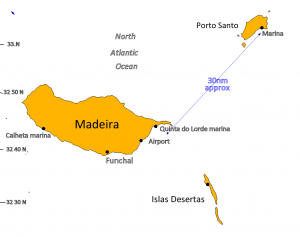 Madeira itself is very historic with delightful architecture and interesting Botanic gardens to visit, as well as exploring the bodegas for the famous Madeira wine. There are numerous restaurants. Of special interest to walkers are the stunning levadas. These are irrigation channels, all with a narrow footpath beside them, that encircle the south of the island at various levels offering wonderful, if sometime quite vertiginous, easy walks through varied countryside and villages.
Currently there are direct flights twice weekly from Dublin to Funchal. It is also possible to fly to Funchal via Lisbon with either Ryanair or TAP, so crew changes and landside visitors will be easily accommodated.

The RCC Pilotage Foundation “Atlantic Islands”, now in its 7th Ed. (September 2021), provides comprehensive information for visiting the islands. Weatherwise temperatures are mild throughout the year, averaging 24oC in summer while sea temperatures are on average 22 oC. North to northeasterlies winds prevail for about 60% of the year but with local variations particularly on the south side of the island.

And now some facts about Conor O’Brien and his boats

W M Nixon wrote in Afloat:
“Ireland’s Conor O’Brien was the first amateur skipper to circumnavigate the globe by the classic sailing ship route south of the great Capes, running down his easting in the big winds of the Great Southern Ocean which blow unhindered round the globe. But although his 42ft ketch Saoirse – which he’d designed himself – was often described as a “little ship”, she was tiny by comparison with the enormous square-riggers which regularly plied this route” O Brien designed and commissioned the Saoirse for the circumnavigation. It was built in Baltimore in West Cork. He sailed under the burgee of the Royal Cruising Club (it was before the foundation of the ICC) and the ensign was the tri-colour of the Irish Free State and that was a first in every respect!

Here is an extract from ‘CONOR O BRIEN: IRISH PATRIOT, SAILOR AND ADVENTURER’ by Jim
McAdam
‘Sailing was his first love and he designed and had built a yacht, Saoirse, to circumnavigate the globe. Saoirse (‘Freedom’) was a 20 ton, 42 foot ketch built in 1922 in Baltimore, Co. Cork.
He made the famous circumnavigation between 1923 and 1925 – the first recorded by an amateur skipper from west to east. His account of the voyage – “Across Three Oceans”(1927), became one of the classics of maritime literature. Given that the independent state of Ireland had only been established in 1922, he was certainly the first person to carry the new flag of the Irish Republic around the world’.
O Brien also designed the Ilen, a 56-foot auxiliary ketch based on ‘Saoirse’. He personally supervised the construction in Baltimore on behalf of the Falklands Island Company and undertook to deliver the vessel to the Falklands. The Ilen subsequently plied the waters of the Falklands profitably for nearly 60 years. It was brought back to Ireland and restored by Gary McMahon (ICC) in Hegarty’s Boatyard near Baltimore.

We have been in touch with Gary and appraised him of our plans. Gary may well have other plans for the Ilen in 2023 but joining the cruise is a possibility. Also, a replica of the Saoirse is currently being built in Baltimore on behalf of Fred Kinmouth. We have also made contact with Fred and suggested the possibility of Saoirse joining the cruise? Now, there’s a thought. Watch this space.

More links to the ICC David Delamere’s (ICC) wife Charlotte (O’Brien) is a grandniece of Conor O’Brien. We are in touch with Charlotte and her sister Sylvia, and are grateful for their assistance Expert on O Brien Jim McAdam who has written extensively on O Brien and the Falklands has been consulted.  Jim is more than willing to be of assistance both in providing talks to ICC members at an appropriate time and to be available to us to ensure accuracy in our understanding of O Brien.

Biography on O Brien.
‘In Search of Islands” by Judith Hill (Publisher Collins Pr; 1st Edition. (September 16, 2009)) This biography of Conor O’Brien, using his own drawings, writings, and letters, records the eventful life of a sailor and mountaineer, fiction and travel writer, designer of boats and buildings, Irish nationalist and defender of Britain.
He made history by sailing around the world in a small yacht in 1923/25, climbed mountains with Mallory and Young, joined the Irish Volunteers and shipped guns with Erskine Childers, and wrote a bestselling book. Conclusion    Quite apart from the commemoration of Conor O’Brien’s circumnavigation, this event promises to be a memorable cruise in itself. Don’t miss it. Start planning now and drop usan expression of interest email as requested above.

*Scribes note:
Conor O’Brien was also known as Conor O Brien and indeed some of his articles were
published using the Irish version of his name Conchubhar Ua Briain. Judith Hall in her
biography refers to him as Conor O’Brien and that’s what we have generally used